The life seems to be like a fast train.   Weekdays like a stations you pass without stopping and weekends are short stops to see some other people outside...  How different it is at the age  of -teens and now.

I shared this tree just about three years ago.  If interested you can find that post here: https://doriyama.blogspot.com/2018/07/    The tree looks a bit more mature now.  The crown is a bit heavier but I am  still thinking about it much more like a deciduous literati than anything else.   ( Well, I know. It looks  quite heavy in fact, but don't you think that one can see things the way one wants?  First there is the Wizzard of Perspective, second the Witch of Camera and last but not least the Kind Lord of ones Mind )

Total height of the tree above the rim of the pot is about 50 cm while the first branch is at 30 cm. 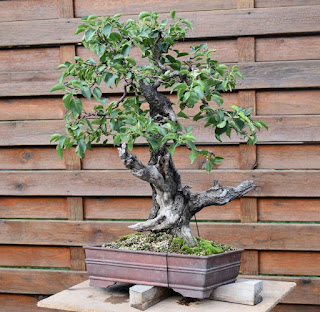 Very dramatic dead wood feature.  Because of the changed position the remains of the root on the left are now showing the straight cut - some more carving ahead. 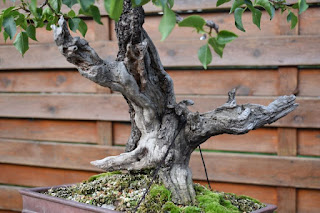 Time to start looking for a new pot

Collected in 2015 in the Central Bohemia.

This branch has been pulled down by about 7 cm.  There is a cut at the base and another one in the middle.     Will see if  I can go any further in the bend.  If so I would need to reconsider the presence of the first branch on the left.  It looks a bit redundant even now and with better inclination of the problematic branch it will be even more so. 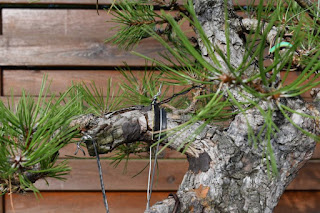 The other one is a real brain teaser: massive outstanding root.   There was a stone between the trunk and the root that has been removed in the course of time.  And now what?   Get a new stone there?  Remove the root?   Try to pull them down under the soil surface?  And what about the reverse taper?

Well, we will see.  I hope to start fixing this challenge next year. 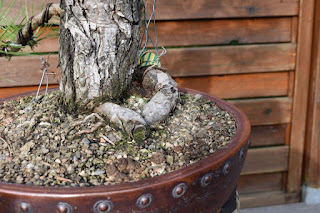 And another one.   Different bucket though.  I am really looking forward to fix this one.   Remains of  wood that used to be the main trunk.   It was given the rough shape two years ago and since then it was left to dry out.  Moving it a step or two further that is another task for next year.   And not to forget the same applies for the top of the tree where I need to create a kind of a shari to improve the taper. 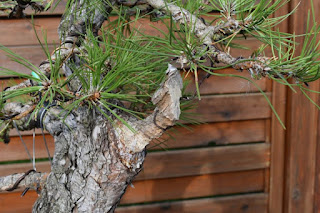 On the positive string - the bark in the lower section of the trunk make a nice pattern. Like it. 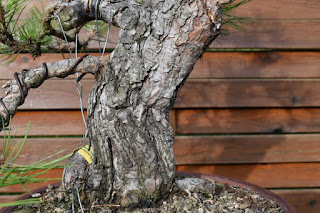 The pine has been wired at the beggining of August.  Just spreading shoots to get them as much light as possible without playing with the design.  There is still plenty of other work before this stage...

Crazy world.  It is a summer.  Time to enjoy your holidays and relax.  Reality?  In many places it is just a moment to see your properties and belongings are taken by storm or water.   And this is not even the worst.    Many people were fighting just to safe their bare life.  And many of them have lost.

Water and Wind.  Good servants but bad masters.   But is it really just the Nature to be blamed for it?   What is the role of the mankind?  Nobody knows for sure.  But the mankind has been doing a lot of bad things for the sake of Earning and Consumption.   Regadless if we paint these words  into more fancy colours such as amusement, dreams fulfilment, better life or something like this.

It is just a shame that all the time we follow the same scenario:

Gosh. That's it.   So here it is the promised tree

Width: 28 cm which makes it a kifu sized tree.  Plans to move the crown a bit higher and closer to the trunk.  We will see... 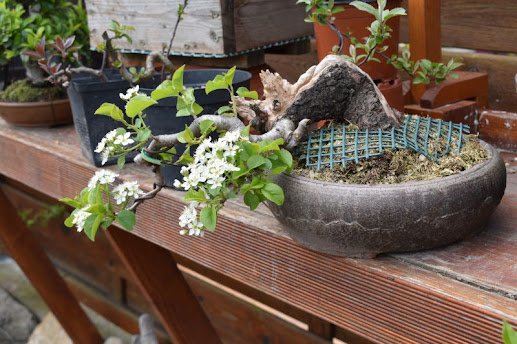 Pyracantha coccinea_Shohin. Pasture for a flock of green rose chafers.

Defoliated in early March and since then protected against frost.  The picture below has been taken on 16th April 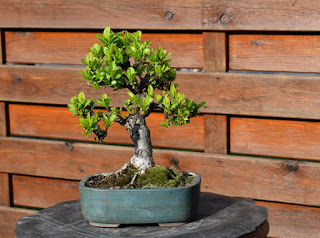 This one is from 1st June.   You can see the other Pyracantha on the right only with buds. 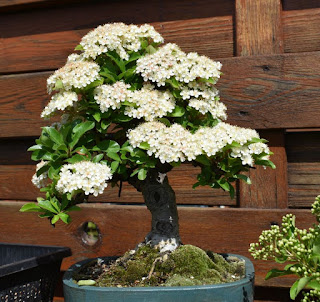 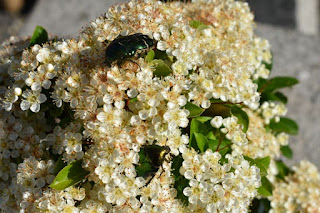 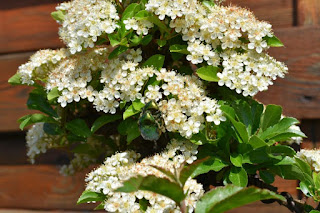 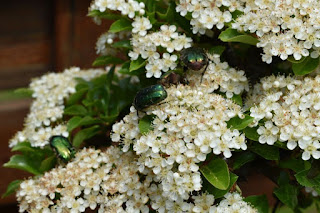 Welcome a new dweller at our place...

Busy spring day.   Late afternoon.   Buuzzzzz.  Head up and looking around. What was that?  Nothing can be seen.  Strange.  Sounds like a large bumblebee.   And again Buzzzzz.    Now I had a chance to spot a dark colored Something that zoomed around my head.   Sized like a large bumblebee, sounded like a bumblebee BUT what about the color?   A bumblebee from Chernobyl?  Or a creature from an eastern laboratory?   Gosh, need to find out.  Right,  let's  try to get a picture of  it first.

A number of photos that could be labeled  like:

- the exact place where the creature was a blick ago

Later on I have managed  to get some reasonably good pictures with nicely sharp backgrounds but blurry image of the creature. 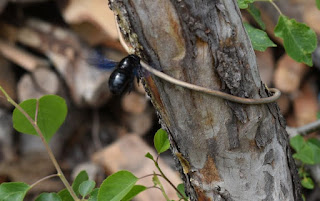 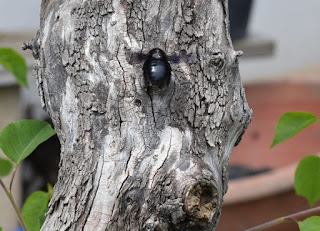 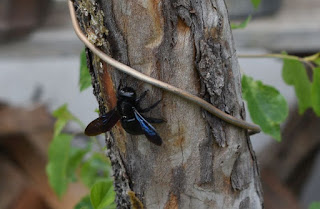 With the pictures and help of the aunt Wiki it was quite easy to find out what it is:

Xylocopa violacea, the violet carpenter bee, is the common European species of carpenter bee, and one of the largest bees in Europe. It is also native to Asia. Like most members of the genus Xylocopa, it makes its nests in dead wood. It is not particularly aggressive, and will attack only if forced to

Perhaps harmless for a cautious gardener but what about our trees with a deadwood?  At the end of the day it is a CARPENTER bee, isn't it.   Important part of their life cycle is a "production" of  tunnels in deadwood where they  lay their eggs.  Literally they are biting off decayed wood creating tunnes 10-30 cm long with a diameter of 12-13 mm.  Ouch!

This particular bee has inspected the deadwood on one of my mahaleb.   The old stub was probably still too hard to chew.  She has tried it but then she has discovered old wooden bowl that I use as a decoration.  And she love it.

Interesting to see something like that for the first time in my life.  I am happy to have it but I would need to check my trees with deadwood to avoid any open dispute...

One of the early runners.   Lot of blossoms here while some other mahalebs are just about to start showing first flowe buds.  Most of them came from the same yamadori location meaning that their genotype is/should be fairly similar  but they were overwintered on differenet places around my place.

Good for me.   Thanks to that the spring festivity season will last longer... 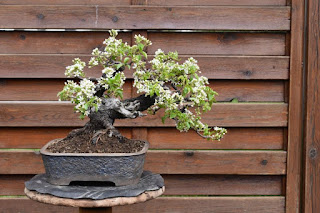 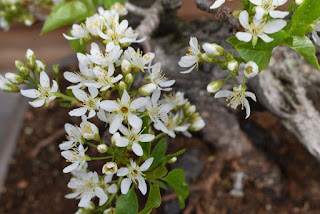 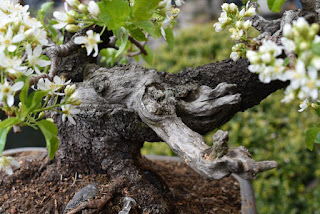 Being strict with its height of 22 cm above the rim this little mahaleb should not qualify into the shohin category.  With some more needed development I think that  the final height is somewhere around the 25 cm mark.

Repoted, some root work and back into the wooden box.  Covered with shredded sphagnum moss and plastic mesh to keep blackbirds away.   Some females love to use this moss for bedding in their nests...That's above their rutine digging activity.   They make life harder but I do like them.   Nice to watch them taking regular bath in the pond in the early morning regadless the weather.  Winter? who cares...  Lovely to see the young birdies - little downy balls - sitting somewhere in the undergrowth demanding more worms from their parents.   And their parents trying to keep away faddy cats and plundering magpies.

Well yes,  they are a pain in the butt with all that mess they create in the garden looking for food.   But if I look around in the Nature - using slightly different optics - where would stand  Homo sapiens? 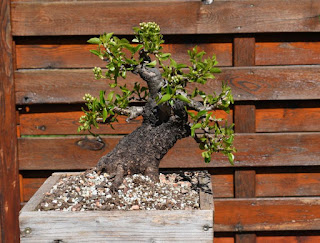 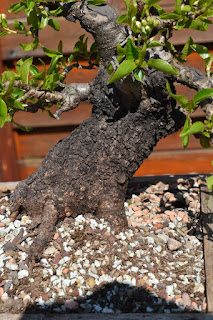 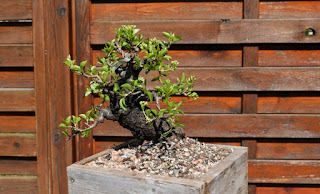 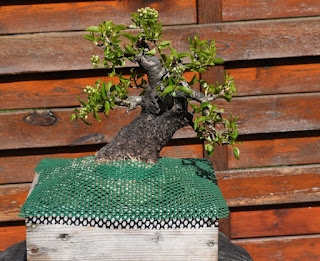 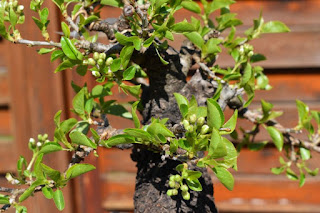 The life seems to be like a fast train.   Weekdays like a stations you pass without stopping and weekends are short stops to see some other...